The Ostracon: Dispatches from Beyond Contemporary Art’s Center, an arts writing site by Nicole J. Caruth and Paul Schmelzer, looks at figures and ideas outside the mainstream of contemporary art—from public policy, indigenous rights, and folklore to community organizing, historic preservation, environmental science, journalism, and food justice—that may offer insight into new forms of making art that are more responsive, relevant, and connected to the way we live now as individuals and communities. Taking its name from the pottery shards used in ancient Athens when voting to ostracize community members, the site aims to celebrate, instead of push out, voices from art’s periphery.

In 1951, the Georgia State Department of Public Health and the Association of American Medical Colleges commissioned filmmaker George C. Stoney to create a documentary about childbirth, specifically, the practices of Black lay midwives in the Deep South. Also known as “granny” midwives, these women were trained through apprenticeship and respected healers in their communities. With the help of community liaisons, Stoney met Mrs. Mary Francis Hill Coley (1900–1966), a midwife who is said to have delivered more than 3,000 babies in roughly 30 years. For four months, Stoney followed “Miss Mary” to her patients’ homes, observing her practice and deriving inspiration for his script. Miss Mary would become the star of his film, All My Babies: A Midwife’s Own Story, a bizarre period piece that merges reenactments by a mostly Black cast with midwifery instruction, a live birth, and a hymnal soundtrack.

All My Babies was intended to educate lay midwives in the Deep South, and Stoney was given a list of 118 teaching points to incorporate. But the film found a broader audience. Advertised early on as one of the “outstanding humanist works of American cinema,” All My Babies holds a place in the pantheons of film history: Stoney donated his outtakes to the Museum of Modern Art’s Film Department, which was at one time a distributor of the film. And in 2002, the Library of Congress placed All My Babies on the United States National Film Registry, calling it “a culturally, historically and artistically significant work.”

Stoney paints a familiar picture of Black subjects under the tutelage of a white  “professional” or “expert.” What his film doesn’t show is how much the American medical establishment loathed—but learned—from granny midwives, drawing from their deep well of knowledge as community birth attendants before outlawing their practices. Women have always served as birth attendants, and it stands to reason that skilled birth workers in Black communities date back to ancient societies, though the literature focuses on slavery and segregation. In the antebellum years, Black midwives served their enslaved sistren and masters’ wives. Post-emancipation, they typically provided birth services to women in rural communities that lacked access to hospitals or women who feared medical establishments due to entrenched racism and, ostensibly, the decades of nonconsensual experiments on Black bodies. As Lynne Jackson writes, doctors and nurses generally looked down on lay midwives in the Deep South, recognizing them as a “temporary and unfortunate necessity.”1Lynne Jackson, The Production of George Stoney’s Film “All My Babies: A Midwife’s Own Story” (1952), Vol. 1, No. 4 (1987), p. 387.

When All My Babies was released, the maternal mortality rate for Black women was 3.6 times greater than that for white women. One could speculate that Jim Crow segregation and lacking medical technologies underlie this disparity. But now, nearly 70 years later, the statistics are not much better. According to a recent report from the Centers for Disease Control and Prevention (CDC), Black women in the United States die from pregnancy-related causes at a rate 2.5 times higher than their white counterparts.2Emily E. Petersen, MD; Nicole L. Davis, Ph.D.; David Goodman, Ph.D.; Shanna Cox, MSPH; Nikki Mayes; Emily Johnston, MPH; Carla Syverson, MSN; Kristi Seed; Carrie K. Shapiro-Mendoza, Ph.D.; William M. Callaghan, MD; Wanda Barfield, MD, “Vital Signs: Pregnancy-Related Deaths, United States, 2011–2015, and Strategies for Prevention, 13 States, 2013–2017,” Centers for Disease Control and Prevention, May 10, 2019. (Reports in previous years showed a rate of 3.3 to 4 times higher.) Black infants face similarly horrible odds with a mortality rate more than twice that of white infants. Why does this gap exist and persist? Everyday “pull yourself up by your bootstraps” anti-Black rhetoric would have us believe that poor lifestyle choices by individual mothers is the reason for the disproportionate statistics. But multiple studies point to structural inequities, including differential access to healthcare, healthy foods, clean drinking water, reliable transportation, and safe neighborhoods. Researchers also recognize that the chronic toxic stress of racial discrimination takes a toll on the body, increasing the risk of physical health problems. And then there is the centuries-old myth that Black people are impervious to pain, a racial bias that crosses class and influences medical care—or lack thereof—in doctor’s offices and maternity wards across the country. Women’s stories of neglect include rushed cesarean sections, too little anesthesia, and failure to listen when a mother senses that she or her baby may be in danger.

Despite how much time has passed since All My Babies was created, the film continues to be germane, especially now amid a resurging demand for Black birth workers. Recent journalism has turned the spotlight on midwives and doulas of color, noting how their involvement fosters better health outcomes for Black families. (As an aside, a midwife or doula wasn’t even mentioned as an option when I was my sister’s Lamaze partner 28 years ago.) Birth workers serve as advocates for the mother but occupy different roles. Nowadays, midwives are clinically trained, licensed practitioners who deliver babies in homes and have access to hospitals if needed. Doulas are trained, unlicensed practitioners who provide emotional, physical, and educational support from pregnancy to labor to the postpartum period. In the past, a midwife might have done it all and in some countries or situations they still do.

Midwives and doulas were at the center of my recent conversation with the San Diego–based artist Andrea Chung and D’Yuanna Allen-Robb, the director of Maternal, Child and Adolescent Health at the Metro Public Health Department in Nashville, for the forthcoming book Women Picturing Revolution: Representations of Black Motherhood and Photography.3Edited by Lesly Deschler Canossi and Zoraida Lopez-Diago, Women Picturing Revolution is due out in 2021. In 2018, Chung collaborated with Metro Public Health; Taneesha Reynolds, a certified nurse-midwife; and Ashley Couse, a doula and childbirth educator, to create cooking workshops for new and expectant mothers. Chung drew partial inspiration from her series, Midwives, an homage to granny midwives resulting from her research project with Dr. Alicia Bonaparte.

To understand the benefits of birth support from a public health perspective, I asked Allen-Robb, who heads a new community doula training. She named, among others, greater satisfaction in the birthing experience, lower incidences of experiencing hypertension, fewer complaints of post-surgery pain, and more reports of women returning to their healthcare provider for follow-up appointments. For Black women specifically, she spoke of the innate human need to belong and be in community. “The information shows that Black women primarily benefit from the psychosocial support and having a person or people who understand the unique experience of being Black. I know how I feel when I’m experiencing racism, and I know I’m not crazy because it’s a real thing. A mother [with a support system] might say, ‘I’m being treated differently and there is another voice or set of voices in a hospital setting who are going to advocate for me.’”

In this time of COVID-19, when the data tells us that the lives of the melanated and marginalized are once again overrepresented, and medical facilities are barring partners and birth workers from delivery rooms, it seems more important than ever to contemplate how the disease of racism that infects the American healthcare system has played out not only in terms of death but also in birth.

George Stoney wrote two birth scenes for All My Babies based on what he had experienced in the homes of Miss Mary’s patients. One scene was shot in a moderately well-off nuclear family home where everything was tidy and prepared. The other was shot in a shanty with the expecting couple depicted as emotionally traumatized and unprepared to welcome their child, believing it would be stillborn like their last. Swarming flies in this couple’s home suggest unsanitary conditions. “A main emphasis of the film is cleanliness and hygiene practices for the midwives,” writes Miriam Zoila Pérez. “But this emphasis foreshadows the eventual decline of the granny midwives and the messaging used to discredit them.” A combination of legislation and regulation eventually prohibited the services of granny midwives, but that was after they endured smear campaigns that portrayed them as dirty.

Stoney made efforts to exclude anything that might imply poor Black-white race relations in the American South or that might be seen as a northerner’s attempt to “exploit Southern poverty.” Despite—or maybe because of—what Stoney left out, All My Babies was lauded for its uniqueness, particularly for the way Stoney positioned granny midwives as respectable members of society. In later interviews, Stoney recalled comments that he had “heightened these people.” His editor said to him, “You have shown them so that I don’t think of them as Negroes, but just people.”4Lynne Jackson, The Production of George Stoney’s Film “All My Babies: A Midwife’s Own Story” (1952), Vol. 1, No. 4 (1987), p. 386.

Documentary film and photography have played a critical role in recent efforts to humanize Black maternal and infant mortality statistics. Take, for example, LaToya Ruby Frazier’s photography for Linda Villarosa’s 2018 New York Times article, “Why America’s Black Mothers and Babies Are in a Life-or-Death Crisis.” Frazier chronicled the pregnancy of Villarosa’s main subject, Simone Landrum, a New Orleans–based mother preparing to welcome her third child after the loss of her previous child. Two photographs spotlight the relationship between Landrum and her doula, Latona Giwa (co-founder of Birthmark Doula Collective). Working in the lineage of granny midwives, Giwa represents a life-affirming bridge in the mother-child-doctor relationship.

Frazier’s images echo something that Stoney wanted to portray: a celebration of childbirth and family as opposed to a depiction of trauma. “There are ways to say through photographs, ‘We are strong. We are supporting one another. We raise healthy children. We have this expectation for our families, and not only for our families, we have this expectation of the system around us,’” says Allen-Robb. “When we expect more, we demand more, and we hold people accountable for delivering on the more that we expect and demand. Photography, and images of Black women specifically, can be extremely powerful in not only systems shift, but also in helping us as a collective of individuals shift our own internalized thinking.” I would argue that the best art goes a step further and motivates people to action—which we need more of from all sectors of health and humanities because mothers and babies are dying unnecessarily.

For more information about Black maternal and infant health and advocacy, visit: 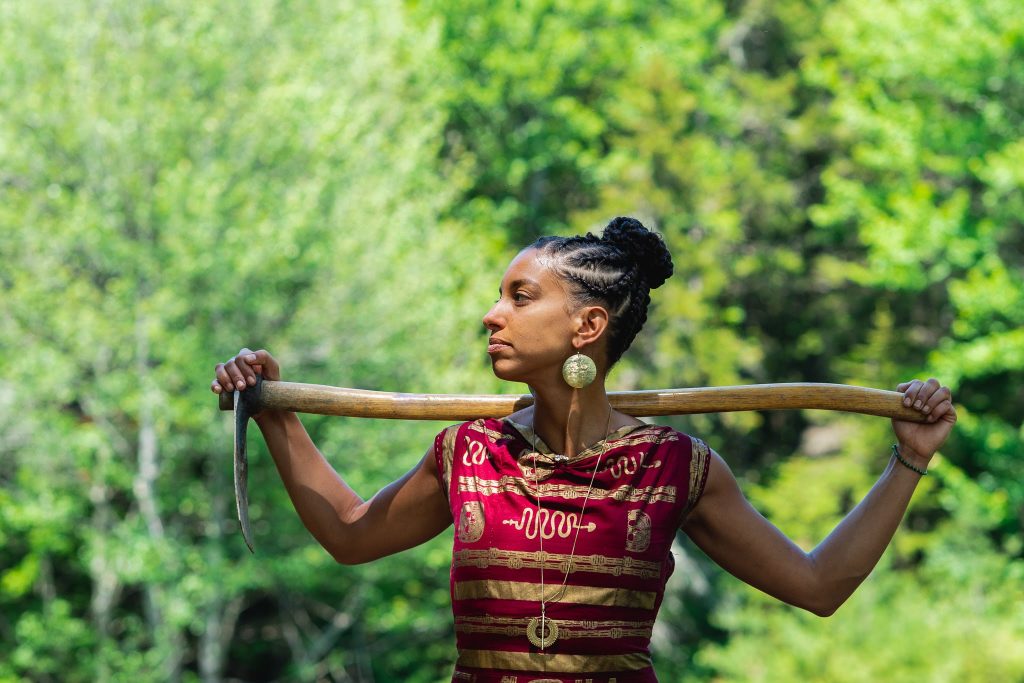 How on earth will we build a whole new world?